I was definitely nervous about “the nights” before I had the girls.  How was I going to stay up most of the night nursing and caring, only to get up and do the same all over again, but sleep-deprived?!  Nursing every couple hours? No major stretches of sleep? It really did stress me out!  It wasn’t like this new no-sleeping thing was going to hit me after a restful period in my life. The couple months before having the girls I mostly slept propped up or on the couch because of the weight and discomfort.  I dreaded the idea of being exhausted all day, eyelids burning and drooping while alone with the girls!  Why not just sleep when the girls sleep?

I didn’t like the idea of sleeping the day away and promised myself that as soon as I felt OK, I would try to have normal schedule. You know, shower, cook, go out and see people, maybe take a nap here and there…which I definitely did do once and awhile!

Better than coffee though was this dream: I had imagined that I could pump milk and others would feed them at night. Oh, yes, that’ll be great. We’ll take turns! Ha, the reality was quite different.  I had to nurse and pump (stored bags and bags of milk for months and months) because of an over-supply of milk, so no bottles and nighttime sleep.  Will write more onproblems with breastfeeding later… Having said all that and now making it nearly impossible to believe, I slowly looked forward to the nighttime and I am not just saying this in retrospect!

It must have something to do with those prolactin hormones (which apparently relax you), but it was pretty easy getting up in the middle of the night, most of the time.  Stephen and I would have sweet talks about the girls, finish conversations from the day before or even start some that had taken the back burner. Many nights we just watched them and smiled…all in that soft, quiet, not- so intense sleepy nighttime.  It afforded us time to let THIS SINK IN. We are parents. We have two babies. We are up in the middle of the night taking care of two babies and one is laughing at us!

It was our little cocoon complete with quiet and stillness that only comes around at 3 am. It was dim and warm and without the need for shades on our windows, we got to watch the beautiful, dark sky all those wonderful hours. Sometimes there was even snow in the early morning.

We were close with each other, with the girls and it was just our little world with Nicolette Larsen singing in the background (and soon us in unison). Larsen’s Welcome to the World Lullaby
We were happy with those nights and as I said, I really looked forward to them. It was a whole new day for us, in the middle of the night and it was so much more precious than the other hours because it was just ours.  Occasionally, Stephen would sleep through some nursing sessions, but mostly he did help with the diapers, swaddling, getting me more water. I like to think that even if we had had 1 baby, he would have been up with me, with us.  A lot of people would ask me, but doesn’t he have to get up for work?  I tried to find gentle ways of saying, yes and me too.  I don’t know why my day of caring for two new human beings was not “work.” Not only was he sharing responsibility, but it really was a beautiful opportunity for us–just the 4 of us to share. Like this beautiful furry arm in the morning.

People have said, oh you get up because they’re your children! I’m not convinced.  I can barely wake up now when they cry in the middle of the night. Once I started to get some decent sleep and nursing was cut back, an unspoken agreement set in- I can’t get up anymore. I sleep SO heavy and can barely get up in the morning after 8 hours, let alone for a crying baby after 2 or 3…Which by the way, has been happening a lot around here. I have been told (since I can’t get up to save my life) that Arlene is crying in the wee hours, standing in the corner of her crib with all of her “stuff” thrown on the floor. She just wants to be put back to sleep and Stephen does this and then mumbles the storyline to me as he falls back asleep…

:: Writing about the nighttime came to me a few days ago.  As Nicolette Larsen’s voice came on the ipod, I was overcome with nostalgia. Oh, Nicolette! With an album cover you just can’t judge (because what is inside, is just wonderful and sweet and perfect), it is full of beautiful heartfelt songs for babies. Ah, those first few notes just grabbed me so unexpectedly! Emotionally and physically it swept me away from the present to a time not so, but so, so long ago! Her voice and that all too familiar music brought me back a couple years to the first few months after the girls were born. Specifically to the months of nights, where we often joked we got to “spend more time together” because there was a lot of time…together all those dark hours in the nighttime with our two babies. There was nursing, soothing, changing, cuddling, and listening to Nicolette Larsen. We played that album over and over. If it was near the end by the time Stephen and I were going to go back to sleep, he’d start it over from the beginning. It soothed us all. I can’t really seem to listen to it without being THERE and even the girls take on an distant look when she comes on… 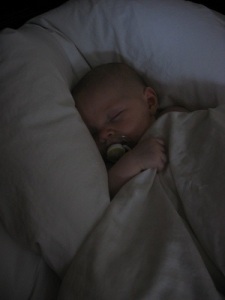